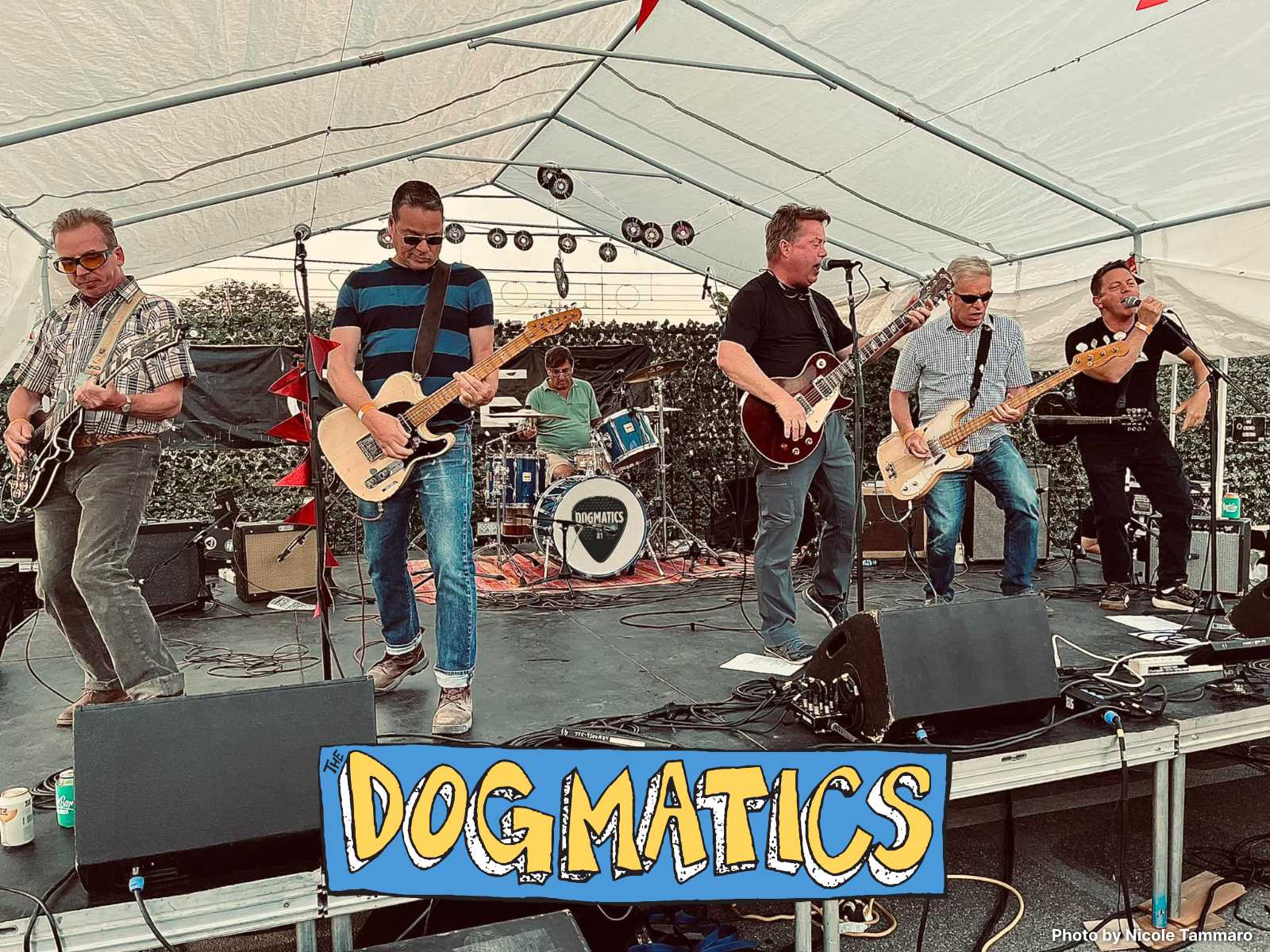 “The Dogmatics Still Keeping the Faith”

Tragedy ended the first run of The Dogmatics. But it wasn’t the end of the story for the Boston garage rock’n’rollers, who make their Milwaukee debut Saturday night at Last Rites MKE.

Back in the early ‘80s, The Dogmatics played shows locally and traveled in a van across the United States sharing stages with bands like The Fleshtones and Replacements. They lived together in the same Boston loft, where they also wrote and tried out new songs together. They would also grieve together when bassist and founding member Paul O’Halloran died in a motorcycle accident on Oct. 23, 1986.

“We just got back from a tour of the Midwest and the West Coast,” says lead singer and guitarist Jerry Lehane. “He was on the back of motorcycle in the afternoon, and they got a flat tire. He went under a truck and got run over and passed away. That was 1986, and we stopped playing after that.”

O’Halloran had formed The Dogmatics in 1981 with his twin brother and guitarist, Pete, drummer Dan Shannon and Lehane. The brothers and Lehane had grown up together and attended Catholic school in Dorchester.

Tommy Long, who is still with the band, would replace Shannon on drums after the band’s first year. They self-released a debut single on their own Cat Records in 1983 and then put out two full-length albums, Thayer Street and Everybody Does It, on the legendary Homestead Records, with unhinged rockers like “Gimme the Shakes,” “Whipped,” and “My Little Sister’s Got a Motorbike.”

In the years after O’Halloran’s death, the Dogmatics would continue to play two or three times a year, but around 2018, as band members’ children began to grow older or leave home, the band decided to reunite in earnest and record new material. They have kept most of the same lineup, with O’Halloran’s older brother Jimmy taking over on bass and the addition of James Young on mandolin and other instruments.

The Dogmatics have connected with Boston-based label Rum Bar Records for a series of well-received EPs, as well as a collection of the band’s older material, and have received enthusiastic airplay on Sirius XM’s Underground Garage channel and elsewhere around the country, including Milwaukee’s WMSE.

The band is keeping busy with shows this summer, including an upcoming date serving as backing band for Barrence Whitfield, and will likely take a break afterward to work on new material, a process that moves more slowly these days, Lehane says.

While they have grown older, the rock’n’roll spirit that has always guided the band has not disappeared. How else can you explain their willingness to participate in the show Saturday at Last Rites? The Dogmatics will fly from Boston to Minneapolis on Friday afternoon to play that night in St. Paul, drive five-plus hours to Milwaukee on Saturday and then hop on a plane at 6 a.m. Sunday morning out of Mitchell.

“There’s something wrong with us,” says Lehane, laughing. “We like to torture ourselves.”

But they keep doing it because, ultimately, it’s what they love to do, Lehane says.

“I kind of make the analogy that we’re in single A baseball,” he says. “We’ve been trying to make it to the big leagues forever, but we’re still stuck down here in single A, still slugging. But it’s a lot of fun, you know? We wouldn’t been doing this if we didn’t like each other and we weren’t having fun.” 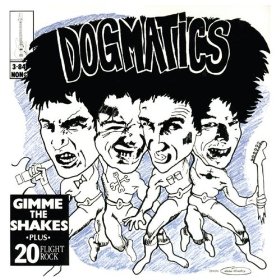 Peter, Paul and Jerry met each other in the 1st grade at St. Matthew’s in Dorchester. They would endure 8 years of discipline together. Crazy, violent times forced many family’s out of Dorchester..The twins moved to Kingston and Jerry to Weymouth. They kept in touch during their high school years and couldn’t wait to get out of the suburbs and back into the city. Paul started a band with lifelong friend T.K, singer Skag, guitarist Sam Babbitt, and drummer Joey Olsen …they called themselves the Savage Beasties, a rocking band and the toast of the South Shore. This band would be the starting point for all of their future bands, T.K , and Paul moved to a loft at 8 Thayer st. in Boston. T.K co-founded “Spearhead Go” along with the gifted Barry Hall, B.C Kagan and Joey Olsen. Spearhead Go started playing out and recording, and they were the template that Paul would follow.

Paul enlisted his brother Pete, Jerry and Dan Shannon to start there own band. Pete and Jerry moved into the loft and started practicing. They would play their 1st show at 8 Thayer St. as the Guttersnipes with Spearhead Go! It was a great 1st show, but it was the one and only time they would play as the Guttersnipes. Pete suggested the Dogmatics and everyone agreed. The Dogmatics played their 1st show @ Cantones in 1981, they were honored to open on a Tuesday night for no money. They continued to play throughout Boston for the next year with drummer Dan Shannon who would leave the band for college. Longtime friend T.K suggested that we enlist Tom Long, the 18 year old drumming prodigy out of Squantum Ma., and so it was.

The Dogmatics would eventually end up playing every shitty little club and backyard party in most of the United States. This did not deter them. In 1984 the Dogmatics would release their 1st and only single to date on their own label “Cat records”.

Gimme the Shakes on the A-side and the Eddie Cochran classic “20 Flite rock” on the B-side. In 1985 the Dogmatics signed with Homestead Records and released their 1st album “Thayer Street”. “Everybody Does It” was hatched in June of 1986. “Teenager on drugs” was released on the “Mr. Beautiful” compilation. “Teenage girls” on the “Rock turns to Stone” complation.

The Paul O’Halloran penned classic “It sure don’t feel like Xmas time” was featured on the “Midnite Xmas Mess” compilation. In 1998 Shredder/Vagrant would release the Dogmatics 2 lps along with some previously unreleased tracks. The Dogmatics songs have been recorded by Boston’s own Mighty Mighty Bosstones, New Orleans prankster’s Dash Rip Rock, The Pussy Willows, Heap and Swedish garagepunk kings “The Locomotions”. On October 23rd, 1986 Paul O’Halloran died in a tragic motorcycle accident. The Dogmatics have done numerous reunions since 1986 with brothers Johnny and Jimmy O’Halloran sharing the bass duties. Paul O’Halloran is loved and missed to this day.

The best songs to raise a glass to this March 17th

More Dogmatics on the InterWebs…

Liner Notes from “The Dogmatics 1981-86” Compilation

Stream or buy the Dogmatics online! 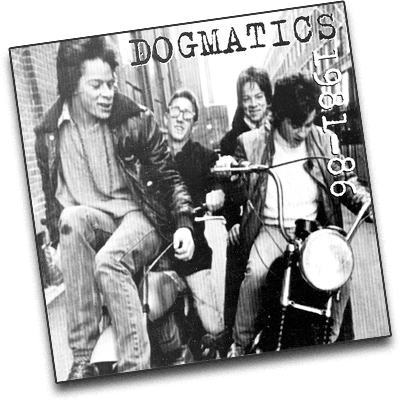 The Dogmatics were no different than any other talentless, self deprecating, beer swilling, girl chasing lunk-heads with guitars. They were young, selfless, and affable. Playing was the only thing that mattered. Money, of course, was unexpectedly welcomed but catching a girl’s eye, a free round of drinks, or simply completing a song in unison were their rewards.

The sound and sight of the Dogmatics was consummate, raucous rock and roll – three minute spurts of high energy garage slop-pop played by possessed rubber faced hooligans with manic fervor. Think Eddie Cochran meeting Johnny Thunders at a keg party hootenanny and shamelessly, though effectively, steamrolling through everything from Jimmy Reed to Thin Lizzy. It was intoxicating and uplifting. They took and then passed on to their audience punk rock’s most important message; “Hey I can do that”. It was an attitude they adopted and encouraged. Music didn’t have to be pretentious and idolatrous as it had become in the late 60’s and 70’s. It wasn’t meant to be professional, excessive and pretty, but rather like the Dogs themselves, reckless, volatile and ugly.

After paying their dues on the local club scene, the Dogs started gaining notoriety and a loyal following. People who saw them once tended to come back with their friends. They were quick witted, always teasing, but never malicious. They made as much fun of themselves as they did anyone else. Jerry was the instigator, always looking for an angle. He was the king of the pop hooks and girl songs. Pete snarled rockabilly grit while wailing on his telecaster. Paul brought in a touch of New York Dolls, social satire, and big fat bass lines. Tommy Long was the Dogs steady, fluid engine. With his sideways smirk and ever present smoke, he was the last line of defense in the occasional concordant collapse. Towards the end they were joined by JG “The Big Baby” playing mad, boogie woogie licks on the piano.

The Dogmatics helped create a strong sense of community and camaraderie within the Boston scene. Their Thayer St. loft in Boston’s South End played host to many a wild after hours party. If your band was in town, chances are you’d end up on Thayer St. Everyone from Blood in The Saddle, to The Del Fuegos, to The Replacements put in long hours of debauchery at the loft. It was a unique time. There was an abundance of talent, interest and support for musicians, fans and promoters. Bands such as Last Stand, Gang Green, The Mighty Mighty Bosstones, Scruffy The Cat, Turbines, Barrence Whitfield and the Savages, Lyres, The Flies, Cheapskates, Outlets, Neats, Future Dads, Classic Ruins, Mission of Burma, Negative FX, SSD and Stranglehold were but a few that made Boston “the place to be” in the mid-80’s. You didn’t dare stay home because you had no dough. There was always someone waiting with a cold beer and a plan to scam you in the door. The Dogs in particular had an uncanny ability to get twenty people through the door on a 4 person guest list and always conned the club out of enough “band beer” to lube everyone up.

1985-86 saw the band step things up. They scrounged the together enough gig money to put out their first single on their own Cat Records label which then led to two LPs on Homestead Records, “Thayer St.”, & “Everybody Does It”. The gigs got better too. Sharing bills with The Replacements, Los Lobos, The Bangles and Long Ryders, gave them inspiration to jam seven guys in to a van and hit the road, where they of course, made friends everywhere they went.

In October ’86, a few days after returning from tour, Paul was riding on the back of their roadie Eddie’s motorcycle when a tire blew out. Paul was killed instantly Eddie was OK. Most of the Boston rock community came together for the funeral. While some aunts might have been a bit freaked out by shaved heads and pierced noses, Paul’s mother was totally moved by everyone’s coming. Paul was buried with his bass and there was a bonfire jam on the beach near his folk’s house. The rock community (led by Lilli Dennison) also put together a benefit for Paul’s family at The Rat. Twenty plus bands played including Scruffy, Treat Her Right, Classic Ruins, The Turbines, Unnatural Axe, The Titanics, The Reducers, The Neats and The Oysters. A photo show of Paul was upstairs. Paul touched a lot of lives and his spirit still lingers. As T.K. said, “If you didn’t love him, you didn’t know him.”

Without Paul, no one had much heart for keeping the Dogmatics together. Jerry continued on in various bands (The Matweeds, Hotbox, The Hornets). Tommy occasionally joins him. Pete mostly plays acoustic, drunken Irish music – torturing his family with his concertina playing…